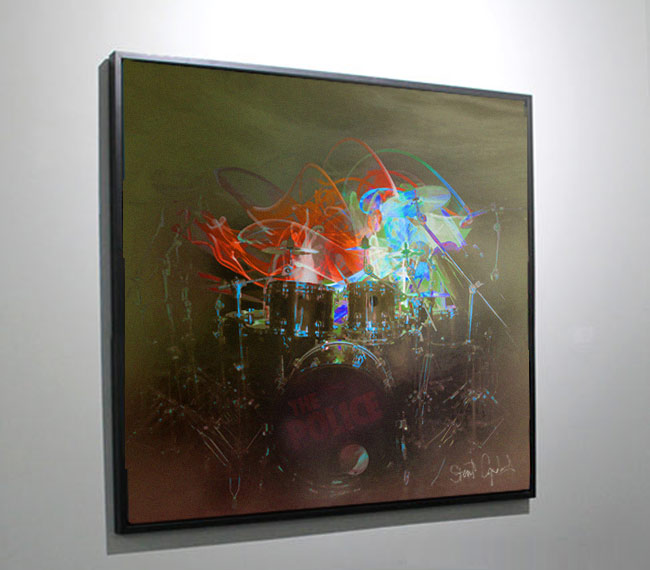 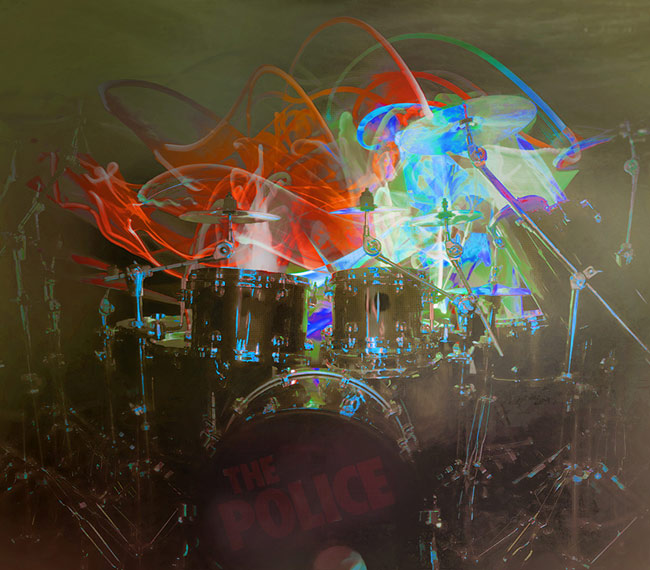 I'm Coming For Your Village
by Stewart Copeland, 2020

Part of the landscape series, I'm Coming For Your Village is built from a 15 second portion of rhythm. Like Klingon Groove, Copeland utilized color changing lit drumsticks in creation. Viewers will note The Police logo at bottom center of the canvas, as well as portion of Stewart's head in canvas center as he creates the visual.

Measuring 30"x 30" on canvas, there are a total of 35 pieces in the edition. All are numbered and signed by Stewart Copeland and SceneFour. All canvases include Certificates of Authenticity and are available to collectors worldwide.

Two Hands and
a Heart

My Teeth, Your Jugular,
One Love

The Flower Power
Of Doom

Big Plans For
Those Octobans

I'm Coming For
Your Village

The Ribs Of
Rhythm

I Dream Of
Stacks

The Slow Chase
Close
Stewart Copeland has led an extraordinary creative journey for more than four decades. As drummer, producer, and composer, his musical footprint stretches radio, television, film, stage, and even the gaming world.

Copeland is unquestionably one of the most acclaimed drummers in music history. His work with The Police, who he co-founded, cemented his place in the history books of rock and resulted in an induction into the Rock and Roll Hall of Fame in 2003. He has also performed on a number of notable recordings for artists like Peter Gabriel, Tom Waits, and Mike Rutherford. He is a member of several highly touted supergroups including Gizmodrome, Oysterhead, and Animal Logic.

Copeland has spent a substantial amount of his career composing. Most notably, Copeland has provided soundtracks for films like Wall Street, Airborne, Talk Radio, and Good Burger. Television scoring work includes a variety of programs including The Equalizer, Babylon 5, and Dead Like Me. He has also composed for opera and ballet.

Copeland has paved a unique creative path over his historic artistic career. In the spirit of innovation, "What is Art?" is now available to bring a new dimension to his rhythmic style and sound through 14 visuals on canvas made in-part from drum performance.

He's a legendary drummer. He's an acclaimed composer. And with the release of "What is Art?" he dives head first into the world of Rhythmic Expressionism. Featuring 14 different works on canvas, "What is Art?" takes drum performance into a new direction - from sound to sight.

To build the collection, Copeland worked with Los Angeles art team SceneFour over a twelve month period. The creation process is an extensive one, but begins with open shutter photography. Outfitted behind the drum kit in a pitch black studio, Copeland works with drumsticks that light in a variety ways to build rhythms that are visually captured into a single photographic frame. The drumsticks are pressure sensitive as well, where the amount of light being generated is directly related to the power of the hit. A second phase of production takes place post capturing, with each of the captures meticulously worked with to bring out their true abstract nature visually. Once printed, several of the pieces are then augmented by Stewart and then reprinted again. Copeland then names the final works.

Each piece in the collection is numbered and individually signed by Stewart Copeland and SceneFour. All feature Certificates of Authenticity. Each is available to collectors worldwide exclusively through StewartCopelandArt.com.